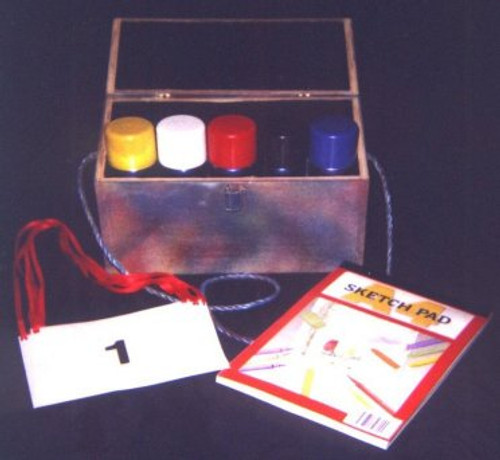 SKU:
UPC:
Availability:
This item is made to order, estimated 2 week delivery time

Effect :
The performer announces that he is about to play a strange version of "Russian Roulette"! Four volunteers are invited from the audience and are shown a group of large cards numbered one to five.

Each of the spectators chooses a numbered card, and, since each has a ribbon attached to it, the volunteers are encouraged to hang the numbers around their necks; the remaining number is for the performer.

At any point in the proceedings, the spectators are given the opportunity to swap their numbers  with each other or the performer. When the final decision is reached, attention is drawn to a wooden "paint box" that has been in full view at all times.

Another spectator is asked to step on to the stage and open the box; it contains five different coloured cans of highly toxic spray-paint, which the new volunteer removes from the box. The performer then asks him "is there anything else in the box"? The answer is "yes, some number cards".

The volunteer removes these from the box and is asked to confirm that they are small number cards marked from one to five, otherwise the box is empty. He is also asked to confirm that on the back of each small number card is a different coloured spot. Each spot corresponds to a can of spray-paint, so the volunteer is instructed to give the correct coloured can of spray-paint to each numbered individual, including the performer.

At this point the performer reminds the audience that by a series of random choices, each individual has ended up holding a can of spray-paint! The volunteers are asked to confirm that all has been fair and above board, and that no one has met the performer before or has pre-arranged anything.

Now the performer asks each person to shake up their can of paint, making sure that each can is full - they do so. He then announces that he accepts all responsibility for what is about to happen, as they are about to play "Russian Roulette"!

One by one, each of the four spectators is asked to step forwards, face the performer, remove the cap from the paint can, and, on the count of three, SPRAY THE PAINT DIRECTLY INTO THE PERFORMER'S OPEN EYES!!

The performer counts  1, 2, 3, - the spectator sprays the can, AND NOTHING COMES OUT! The performer is safe but now the tension builds as the odds in the performer's favour are reduced as the other three volunteers go through the same ritual. However, through fate, magic or pure dumb luck, every spectator's paint can reacts similarly!

Wait a minute, there is one can remaining - the performer's own, left for him by a process of elimination. Not wanting to touch the can himself, the performer selects an impartial volunteer to shake up the can, remove the cap and spray it on to a sheet of white paper - he does this and the can jets forth a thick spray of toxic paint and gas!

The performer is safe and he gratefully thanks his nerve shattered assistants as they return to their seats.

NO STOOGES ARE USED IN THIS EFFECT.

THIS INCREDIBLE ILLUSION IS SELF WORKING, LETTING YOU RELY 100% ON PRESENTATION.

Ronaldo performed this for the very first time at the 2003 Edinburgh Gathering and had the audience cringing on the edge of their seats. This IS a nerve wracking performance item for onlookers and the participating spectators.

Babe in a Box illusion

Eruption, Produce fire from your hand