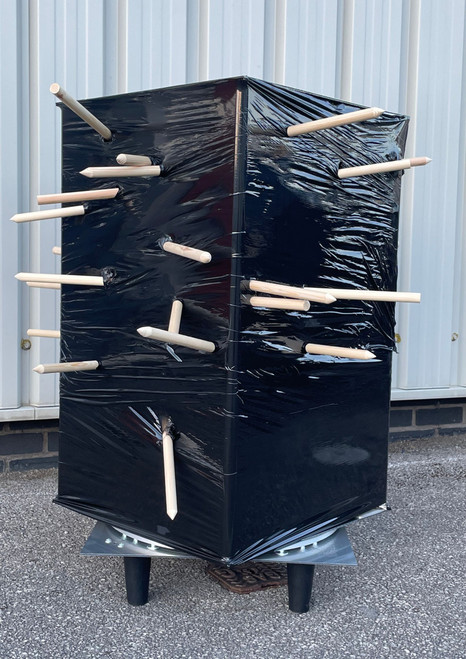 Custom design and Built by illusioncraft

Typically when the illusion is performed with a cardboard box there is always a weak point,  And that is that there is always one area of the box which is not filled with spikes.

Others have come up with remedy’s for this but SpikeWrap 360 contains a unique secret that overcomes this in a new and very clever way.

In fact it’s so good that all purchasers will be required to sign an agreement that they will not reveal the secret to protect all users of SpikeWrap 360.

Are you worried about hurting your assistant, as you want to thrust the spikes as fast as possible, while you are rehearsing, why not use clear wrap, so you can see them, and they can see you.

Light weight, pack small plays big, start clean, finish clean, great angles, no costume limitations, Build it in a few minutes, can be performed with a spectator next to the prop, many presentational possibilities… practical strong and easy.

Perfect for Cruising, Holiday parks & any show where you are short on space in your van.

Packs down to fit in a suitcase, even the legs unscrew to make it smaller, see the photos

The illusion can be built up in under 10 minutes.

Weighs just 10kg not including the pallet wrap.

The illusion is raised off the floor, so you can see all-around.

Wooden spikes really stand out against the black pallet wrap.

Spin the illusion 360, spikes on every side making it look an impossible illusion.

One roll of pallet wrap will cover the illusion about 20 times, and costs around £5.

I can make the illusion bigger, as some illusionists use bigger boxes, please contact me for further info.

How will you perform SpikeWrap 360

If you already perform the Cardboard box illusion, you won't need much rehearsal to perfect SpikeWrap 360.

Babe in a Box illusion

Eruption, Produce fire from your hand